Just the other day my old friend Tim says to me:  “Do you remember that time I visited you in New York.  You and George Kimball were living on East 7th St. in some apartment over McSorley’s bar.  We sat on your stoop and watched a stick ball game.  You and George explained all the rules and variations to the game…what happened when the ball went under a car or stuck on a fire escape or went all the way up to 3rd Ave.  Then we went into the bar and drank beers.  Do you remember that?”

Uh……..not exactly that.  I’m afraid that moment is gone.  But yes…7 East 7th St.  It was heaven for a young 20 something kid not long out of the military, separated and soon to be divorced a self-proclaimed poet from out of Kansas on the Lower East Side.  Jeez.  7 East 7th was Paul and Sarah Blackburn’s apartment and somehow George had gotten the sublease for a period I can’t remember exactly if it was when they went to Europe or just driving across the country. It must have been  1968 or 69.   It was before the cancer.  I had been living in NYC for a while, staying at a friend’s loft on the Bowery.  It was across the street from Robert Indiana and when the lights were bright in his loft it meant party…..some food and booze for sure.  Of course the bars on Bowery back then sold a glass of beer for 15 or 25 cents.  Rough crowd so to speak but pretty harmless and somewhat easy to talk too.  I worked at an ad agency in mid-town, actually working for something called ‘market research’.  Not Mad Men deal but did have something to do with IBM punch cards…sorting them and doing something with reports.  Who knew.  Best time of day was lunch when everyone walked over to Times Square for a hot dog or slice of pizza.  Some opted for a more exotic lunch which include a bag of smack.  A slow afternoon at the office for them.  I worked there for some time and often walked home….40 some blocks I guess….was young then.  A slice of pizza on the way and money left for the bar(s) and dope at night.  Sneak a jug into St. Marks for the poetry reading.  Who remembers.

East 7th Street was a wonderful place then.  Of course the anchor was McSorley’s but there were wonderful Ukrainian bars stuck into the basements of a few of the brownstones and the Fillmore East was around the corner (you could sit out back in the alley and hear the bands).  A most beautiful woman owned an African import shop next door to our building and it was always a place to fall into and relax off the street.  And this was during the ‘revolution’ don’t forget.  Lots of running around to demos and setting trash cans on fire and what not.  Was also acid and crabs and  “Jersey boys and girls” on St. Marks Place.  There was a wise guy bar somewhere down 3rd Ave we could go into.  The rule was we couldn’t go in back room, or play pool…sit at the bar and DO NOT bother the guys in tight fitting silk suits.  The ones with rolls of bills the size of soup cans!  No problem that.  And Sun Ra playing over by Tompkins Square in some storefront bar… Sun Ra and theArkastra.  Ai yi yi.

But it was McSorley’s just as Blackburn describes in his poems….lit by hazy sunlight filtered through the cig smoke, bouncing off a cat in a window, the smell of ale and onions, Matty behind the bar.  Quiet it was too.  So we met, Paul and I and like so many new “poets” to NYC he took time.  We spent several afternoons over ales, smoking and looking over poems.  I had a lot of them from my time in Kansas.  I think most of  them were pretty awful.  I was young.  When you’re young you write crap.  That is true for all of us.  Me for sure.  But that was not mentioned by me or Paul.  And he brought in a stack of typed poems of his.  I read his, he read mine.  I still have that stack of paper somewhere and I remember him circling several lines I had ended with “ing”.   “See that mark.  Fucking Paul Blackburn made that!!”  I used to say.  Now, not so much.

But there we sat.  Both reading.  Maybe joined for a while by someone…George Kimball or one of the waiters or the ice man or other guys.  He would turn over the poems and we would chat with the visitor.  What’s going on. You can read all that in The Cities or the other books.  I don’t remember at all what Paul and I talked about the poetry.  I am sure I couldn’t have said much about his except “Cool” or “Far out” perhaps.  I wish I could remember what he said but I can’t.  Too bad.  But one thing I am sure is that he was encouraging and not mean and not put off at all by my attempts.  He, if memory serves, may have been starting up a new series of readings and told me to come.  Can’t remember where though.

We would sit in McSorley’s for hours it seemed and then maybe walk over to one of the Ukrainian bars for vodka and a sandwich or maybe around the corner to Ratner’s Kosher Dairy Bar.  But never very far and not for long.  He would be home when Sarah came home.  Upstairs at 7 East 7th.  I don’t know how many times we did that…maybe half a dozen.  We talked a lot about Kansas…he was somewhat curious about the poets out there..Charley Plymell, John Fowler etc.  I don’t remember him talking at all about women or girls.  It was all about poetry and writing and maybe what was going on with the Lions Head softball team.  George played on that.   Maybe Openhiemer too.

And then they, he and his wife, left town and George and I moved into 7 East 7th St.  It was a perfect NYC apartment a long hallway with tiny kitchen, couple bedrooms, living room up front (if you got locked out you could crawl up front somehow – I forget how).  Or just wait on the stoop for someone….always someone.  It was a small neighborhood.  You were always seeing people you knew.  “Locked out”.  Yeah.  “Wanna crash at my place.”  Sure, why not.  Off we went.  Was never too far.  There was also a lot of yelling to get keys tossed out windows.

I don’t remember seeing Paul when he returned to that apartment or again after that.  George and I moved to somewhere over on Ave C and then I burned out on NYC and came back to Kansas.  Never saw Paul again.

He was a good guy for me.  Now 40 years later I cherish the time spent and honor the fact that I can say:  “Yeah, I knew Paul Blackburn.  Wadda ya wanna know?  He was a great fucking poet!  Read his Journals for God’s sake.  Do not forget him and do not put him down for some dumb stuff he wrote.  We all do that, for christsake.”

Editor's Note: Also, here he somewhat is with his kitty kat! 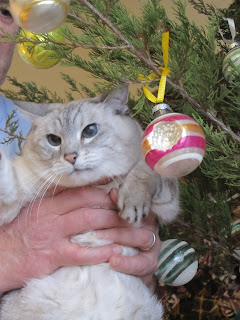