THE RAIN ON FOREGROUND-BACKGROUND STREET:
GUY BEINING REMEMBERS THE MISTAKES OF DEATH

The Abstract Expressionist Mark Rothko’s paintings invariably consist of two panels with a horizontal line between.  Viewing them in series, one realizes that each painting is a version of an archetypal setting of foreground and background.  Rothko’s repetition of the image leads the way in showing us that this foreground and background might be considered symbolic.  The pictures waver between the flatness of the canvass and the three dimensionality of landscape.  Rothko’s artworks become a model of our ability to view and estimate the problems of society, our need to distinguish symptom from cause, to place a specific  action or event in the larger context from which it takes its true meaning and effect—in short, to distinguish for ourselves a variety of degrees of realism.  Andy Warhol’s paintings are similarly about perspective in that the shocking “unnaturally” colored  iconography is a foreground without a background—devoid of perspective.
The advance into abstract painting brings into art and literature a new “dimension” that is as significant and notable a breakthrough as the advance into three-dimensions made during the Renaissance.  This new dimension is the inexhaustible virtual and conceptual dimension of thought and mind, so that the visible and the literal are no longer the exclusive purveyors of “realism.”  A definition of the word “perspective” is wisdom.  The scene of modern or, perhaps, Post-modern artworks is the discourse of visibility.  It is a fourth dimension of permanence, knowledge and measurement.  This new perspective and dimension comprises a collage of qualitatively diverse components—photographic images, mathematical symbols, verbal fragments, visual fragments, actual objects, blank space, historic evidence, naturalistic representations, mass media data, scientific diagrams, stream of consciousness, text, types of fabric.  Most importantly the “objects” in these types of paintings are presented, via a deconstructive aesthetic of freedom, in their meaningful substantiveness rather than their superficial physical impenetrability.  The resulting works are a conceptual ensemble that presents a credible, transcendent type of reality—a psychic representation with a more varied, insightful, moral, reliable, far-reaching and creative “perspective.” 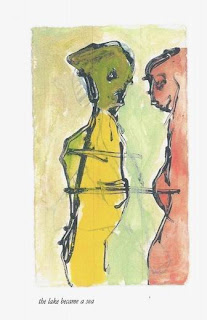 **
It’s been quite a while since I first viewed the work of artist and poet Guy Beining in such neo-Dadaist Xerox  ‘zines as PhotoStatic and Raunch-O-Rama.  Perhaps the centerpiece of his new work is a four-by-six pamphlet Out of the Woods into the Sun from Kamini Press, Stockholm, Sweden/Hydra, Greece.  The book has a small rudimentary color artwork on the cover—similar to the cover artwork of Jack Kerouac’s Poems All Sizes—a color thumbnail painting of the author by Henry Denander and orange endpapers.  The contents are reproductions of fifteen of Beining’s color artworks, each of them, imbued in surreal and symbolic color, depicting suggestively but attentively—gently with quiet understanding—what might sarcastically be called the actual human form, in extreme philosophical nakedness.   Forbidden to add on anything outside the empirical, the line drawings and water colored spaces contain flabby protoplasmic bodies of indistinguishable gender, nudity deformed from the inaccurate yellow of adamant lipstick, garbled foreground-background both producing and inhibiting formal development, geometric spaces between people, confusingly extra-complicated polluted freedom, the seductiveness of the intentional.


These fifteen small works convey what occurs as the arbitrary mythical justification of Mankind’s Ptolemaic self-conception endures the unavoidable disasters of infinite foreground-background. These are the instances that require humanity to search for more well-founded explanations of itself.  Science with its uniquely impartial methodology is invented.  Metaphysical events begin to take shape, such as life’s  origins.  Reasons have to be found for every occurrence and every law.  The problematic of pleasure—of what is acceptable behavior and what is “sin”—arises.  Essentially the word “sin” is thrown out as arbitrary.  The language of individuals begins to carefully avoid presumption and exaggeration.  Objects begin to be scrutinized and questioned in systematic detail.  A marvelous picture, based solely on unbiased truth, of humanity and the physical setting in which it dwells, comes into being.

Beining’s pictures are of humanity from an anthropological perspective, without predisposition toward humanity’s value or worthlessness.  In many ways, Beining’s portraiture of human reality is similar to German Expressionism.  In content more than form, Max Beckmann’s famous painting The Night, with its cluttered pastiche of abuse and criminality, has the same philosophical resonance as Beining’s amorphous, indeterminate blobs.  The theme of Beckmann’s paintings is inner structure in transition from the the religious to the philosophical.  Though they patently don’t appear so, the people in Beckmann’s The Night are as unformed as those in Beining’s paintings.  Much of German art at the beginning of the 20th Century is similar.  In Brecht’s slapstick morality play, Threepenny Opera, the underworld characters sing such lines as, “Or is it only those that have the money/Can enter in the land of milk and honey?”  And “So gentlemen do not be taken in/ Men live exclusively by mortal sin.”

Tom Hibbard has had recent work published in the Australian issue of Jacket, and the current issue of Moria. He also has a new collection of poetry, Sacred River of Consciousness, from Moon Willow press. He is currently involved in the political struggles in the U.S. and world against mindless far-right extremism.